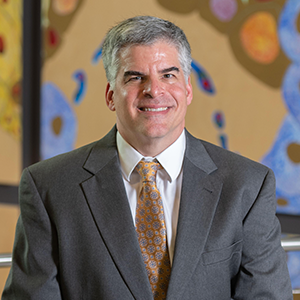 
Andrés J. García is the Parker H. Petit Chair and Executive Director of the Petit Institute for Bioengineering and Bioscience. He is a Regents' professor in Georgia Tech's Woodruff School of Mechanical Engineering.

Dr. García’s research program integrates innovative engineering, materials science, and cell biology concepts and technologies to create cell-instructive biomaterials for regenerative medicine and generate new knowledge in mechanobiology. This cross-disciplinary effort has resulted in new biomaterial platforms that elicit targeted cellular responses and tissue repair in various biomedical applications, innovative technologies to study and exploit cell adhesive interactions, and new mechanistic insights into the interplay of mechanics and cell biology. In addition, his research has generated intellectual property and licensing agreements with start-up and multi-national companies. He is a co-founder of 3 start-up companies (CellectCell, CorAmi Therapeutics, iTolerance). He has received several distinctions, including the NSF CAREER Award, Arthritis Investigator Award, Young Investigator Award from the Society for Biomaterials, Georgia Tech’s Outstanding Interdisciplinary Activities Award, the Clemson Award for Basic Science from the Society for Biomaterials, and the International Award from the European Society for Biomaterials. He has been recognized as a top Latino educator by the Society of Hispanic Professional Engineers. He is an elected Fellow of Biomaterials Science and Engineering (by the International Union of Societies of Biomaterials Science and Engineering), Fellow of the American Association for the Advancement of Science, Fellow of the American Society of Mechanical Engineers, and Fellow of the American Institute for Medical and Biological Engineering. He served as President for the Society for Biomaterials in 2018-2019. He is an elected member of the National Academy of Inventors and the National Academy of Engineering.